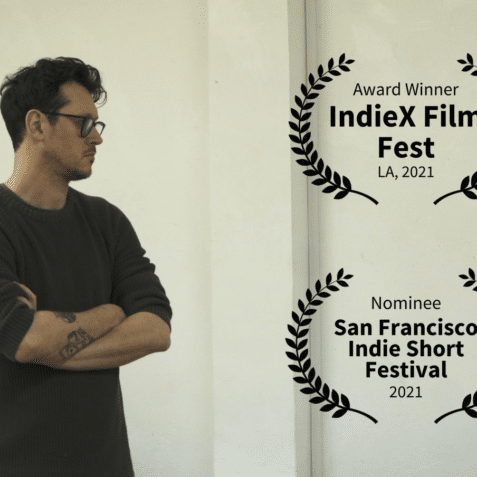 Join us for a film premiere of Street Magic, a new film from local director, Stephen Lloyd.

For an inner-city busker, London can be a pretty grim place. It’s all bankers, beatings and Brexit. But when he stumbles upon an unlikely love story, the fledgling couple inspire a ream of new songs – and he can’t believe his luck. In true Documentarian style, our busker watches from afar, trying not to intervene. But Mother Nature can be cruel and unforgiving; and doesn’t heartbreak make for much better music…?

The screening will be followed by a Q&A with Stephen.

The film screening will be captioned.

Stephen is film and theatre director born and based in Tower Hamlets, East London. He is the Artistic Director of Amplified Theatre, a production company that focuses on music driven films and gig-theatre productions. He has taught at some of the UK’s leading drama schools and universities including Mountview Academy of Theatre Arts, the Academy of Live and Recorded Arts and the University of Portsmouth. His indie-musical film Street Magic won the award for Best Romantic Short at the Indie X Fest in LA and has directed at a variety of venues including Theatre Royal Plymouth, New Theatre Royal, Jermyn Street Theatre, The Bunker, King’s Head Theatre and at the Tristan Bates. He coaches professional actors all over the world whose credits include The Umbrella Academy (Netflix), Eastenders (BBC), Emmerdale (ITV), Rock of Ages (UK Tour), Hair (The Vaults) and Mamma Mia (West End).

Gemma Kenny is an actress who trained at the Academy of Live and Recorded Arts in London. Her screen credits include Street Magic (awarded Best romantic short 2021 in the LA indie film festival, BBC Doctors and Crumble (awarded Dark Psyche BAFTA in 2019.) Theatre credits include It kind of looks like a doughnut (Pleasance Islington 2021), States (The cockpit theatre 2020) and Body and Sold (The Park theatre 2019.)

Reuben is an actor and musician. He composed and performed all of the songs featured in Street Magic as part of Jimmy and the Wolf, a musical duo who describe themselves as ‘hip-hop folk from a wolf and a bloke’. He is also the lead singer of alternative rock band Ghost Arcadia. Acting credits includeTrying for Apple TV, Goosebumps Alive at The Vaults and The Tudor Season for BBC.

About James Bryant (Actor and Musician)

James is an actor and musician. He is in the hip-hop folk duo Jimmy and the Wolf, whose songs feature in Street Magic. As an actor he has appeared in Wolf of Wall Street on stage, Doctor Who: Time Fracture and The Crystal Maze experience as a Maze Master.