Magna, Magna! A personal offer: food and talks for changes and growth

Lockdown has stripped Patrizia of her work, her house, her certainties.

Not sure how to face the magnitude and complexity of the numerous issues that impact us all, she turns to the one thing she thinks, she knows: invite people to sit around the table to eat and talk.

She invites people of different backgrounds to talk about work, race, inequality, class, while eating a three courses Italian meal, prepared with all her love. With joy and ease, she embraces the cliche of herself, hoping to favour, even if ever so slight, change and growth in her guests, herself, and maybe you.

We are a privileged society, yet quite f***ed up!

Ms. Paolini & Friends (JPP) is an ensemble created and directed by performance artist, theatre maker and comedian,  Patrizia Paolini. The ensemble has been working on observations about identity and female comic performance,  while resisting the’ showgirl’ stereotype of contemporary cabaret and other forms of spectacle comedy has adopted. The ensemble aims to be the backdrop or stimulus for collective authorship, cross-disciplinary practice and political critique.

Buddleia Maslen is a performer from Hackney. She trained at Fourth Monkey and has been a part of JPP’s Ms. Paolini Phantasmagoria Cabaret for three years.

Nauen Park  is a performance artist and dancer. She worked as a dancer in the Hans Contemporary Dance company in Seoul. After moving to London, she graduated at Goldsmiths University with an MA in Performance Making where she focused her research on the language of movement. She has a strong passion for improvisation and expressing herself through movement and with the use of various mediums like photography, video and a diverse range of live performances. She has performed with JPP for the last 2 years.

Kieron Jecchinis was born in England. He is an actor known for Full Metal Jacket (1987), Coriolanus (2011) and Jack Ryna: Shadow Recruit (2014). He is the latest addition to JPP. 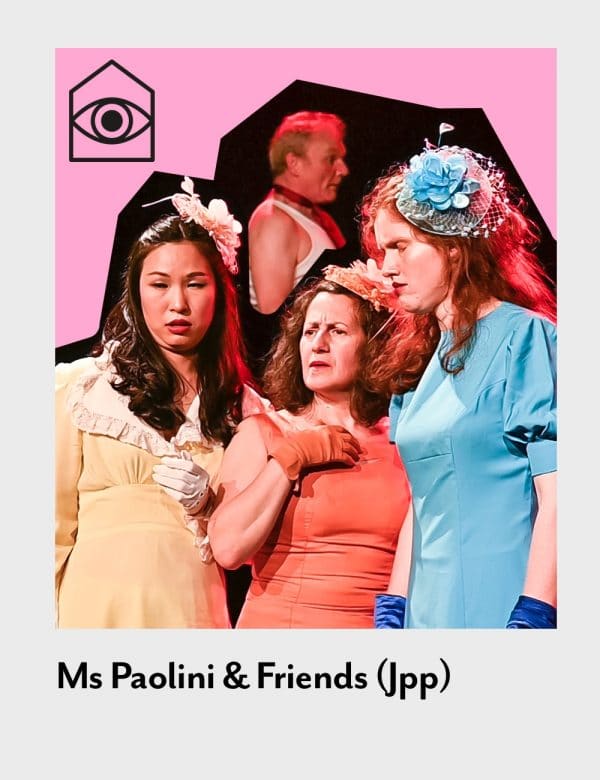