Looking Out, Looking In, Looking Up

Mishti Dance’s contribution features three artists who were involved in the Asian Underground movement. DJ Isuru and Coco Das team up with Ramjac Corporation and Bubbly to create a track based on their experiences of lockdown and focussing on the hope for a brighter future.

The music video, filmed and directed by Coco Das, incorporates her work as a VJ and is based around dance by Bubbly who was due to perform at Mishti Dance #7 which was postponed due to the pandemic.

As always the work features themes and motifs that highlight Mishti Dance’s commitment to the Asian Underground movement and the fusion of performance art, club culture and politics.

Founded by DJ Isuru in 2018, “Mishti” is the Bengali word for Sweet and Mishti Dance takes it’s name from a track by DJ and music producer, State of Bengal.

‘A return to the experimentation of the Asian Underground in the face of commercial clubbing’. The format of Mishti Dance comprises a community-based arts and performance space featuring both poets and DJs, in a radical defiance of the rigid, distinct cultural categorisation of arts events as either high arts- or club music-based.

It is a space for experimental and electronic music and performance arts with South Asian influence. A night club meets an art gallery. Mishti Dance takes inspiration from the Asian Underground music scene particularly the legendary Anokha and Swaraj Asian Underground club nights of the 90s and early 00s.

Coco originally studied art and photography which she later combined with graphic design which then further led to film editing and live visual projections known as VJing. She has worked with the Asian Dub Foundation since their inception and founded the live event promotion Visionary Underground which then grew into the audiovisual collective Visionary Underground which released their debut album ‘Keep The Grime On’ in 2005. She also founded the record label VU recordings and has spent over 20 years photographing and providing visual material for the Jungle DnB scene. In 2017 Coco presented her photography exhibition ADF 20! at the Red Gallery London chronicling the visual history of the Asian Dub Foundation.

Ramjac is sound artist, programmer and percussionist Paul Chivers, one of UK’s unsung electronic pioneers, known for his voltaic live shows during the heady Summer of Love in 1988 and beyond.
Jamming his own flavour of sampled beats live from his Atari and Emulator, Ramjac performed at the now legendary Sunrise, Energy and Back To The Future raves and went on to tour with Orbital, The Shaman and The Irresistible Force. Ramjac went from playing from 50 to 10,000 ravers in a matter of months.

DJ Isuru is a London based DJ and promoter specialising in Bashment, Breakbeat and Acid House. Having studied an MA in Buddhist Studies at SOAS University, Isuru presents the British Asian Music Series on SOAS Radio, in depth radio documentaries on the Asian Underground and Bhangra scenes. Believing that the Sleng Teng Riddim created a paradigm shift in modern Music and that the 90s were an amazing era, DJ Isuru seeks to unite the room, playing those pop hits which actually have artistic merit. His style can be described as alchemical, breaking apart song structure and finding the hidden links between genres. 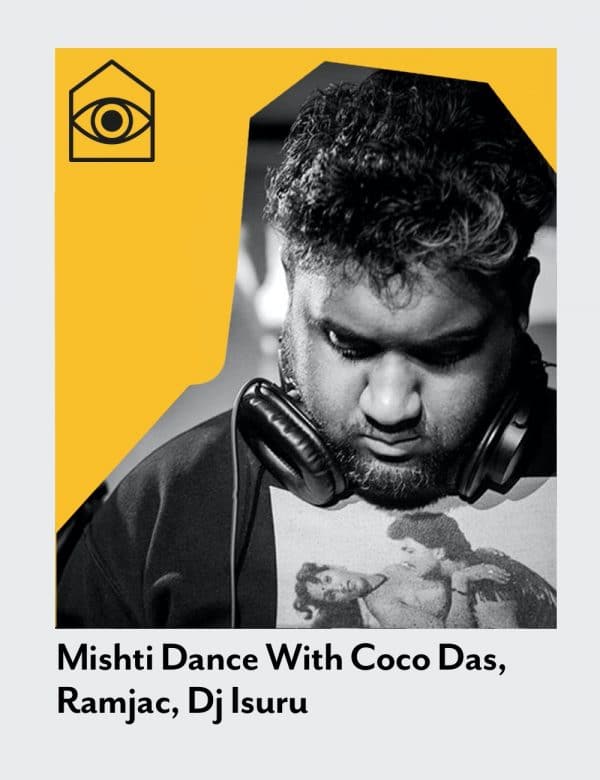