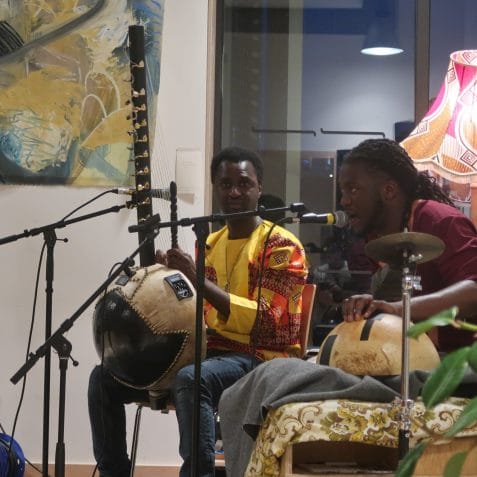 Join two of London’s most distinguished virtuosos of Manding music in this live streamed gig showcasing beautiful, folkloric West African music on Kora, voice and percussion. Alongside the music, there will be discussions about the important role of this music and ways they are bringing it forward in the modern world.

About Jali and Yahael

Jali Bakary Konteh is a Kora-player and griot, resident of Poplar and part of Gambia’s historic tradition of musician, historian and social chronicler. His Great Gambian Griot project unites him with Pa Bobo Jobarteh, also on the 21-stringed African harp, for beautiful historic and personal interpretations of Mandinka heritage and culture.

Yahael Camara-Onono is an in-demand London-based Djembe player and percussionist, dancer, teacher and activist. Being a true child of the diaspora, his playing style has always been steeped in folklore, sought-after amongst the world music and jazz scenes.

Currently Yaheal is working with Jali and other musicians of the highest quality on ‘Balimaya Project, hosted at Poplar Union in February and awaiting an album release through Jazz Re:Freshed.

Balimaya Project uses the repertoire of the Mandé peoples of Senegal and Mali as the bridge to bring the folkloric West African and Afro Cuban music together with Jazz and the sounds of black London, to create something different and unique