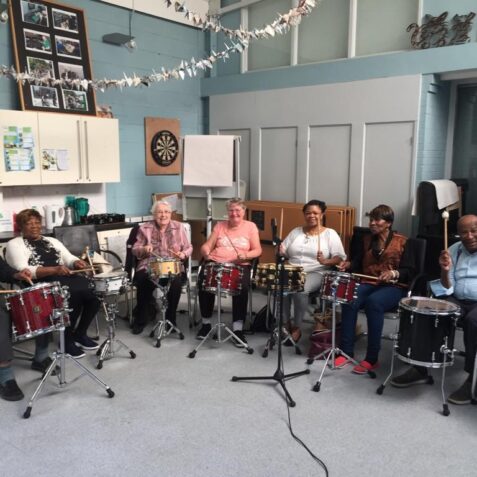 Come and join our Don’t Stop the Beat sessions with Perry Melius to take a musical trip down memory lane! Suitable for those suffering from age related memory loss or diagnosed Dementia and Alzheimer’s.

Don’t Stop the Beat is a developed and practiced creative musical session aimed at those suffering from age related memory loss or with diagnosed Dementia and Alzheimer’s. It is led by Perry Melius, a local East London resident and world class musician. With Caribbean roots, Perry is able to transport you to another musical world and uses practical elements of drumming to keep hands agile and sessions practical to help medical conditions. More than anything these sessions are fun and aimed at the local community to add a new level of care at these times. Refreshments included.

The sessions can be catered for different access needs so don’t hesitate to get in touch should you need anything that requires additional support.

Perry has been in the music industry for over 30 years and it was his mum that first got him into music later than most as he was 17 when she bought him his first kit. He used to play along to The Specials, The Beat, Selector, as he loved the energy of that music, especially as it was very similar to reggae. His cousin had a covers band and they played social clubs, and he first started to earn money doing that. The other players were all much older than him and they taught and showed him a lot of things about reggae and soca. He listened to Carlton Barrett, Sly Dunbar, early ska drummers and also Drummie Zeb with Aswad, who he was hugely influenced by and his favourite drummer of all time is Steve Gadd.

Since then he has had the pleasure of working with artists as diverse as Tricky, Aswad, African Headcharge, Gabrielle, Yusuf Islam, Mos Def, Roots Manuva, Brinsley Forde, Jeb Loy Nichols, Adrian Sherwood, Asian Dub Foundation and Billy Ocean. He was also one of the musical directors on the award-winning ‘The Harder They Come’ musical both in the West End and in America and composer for a range of stage productions with great national reviews. For film, he composed for the Hollywood movie ‘Bad Company’ soundtrack.

Perry is currently the Musical Director for Billy Ocean and is looking forward to being on the road again this year.