A Movie With A Message 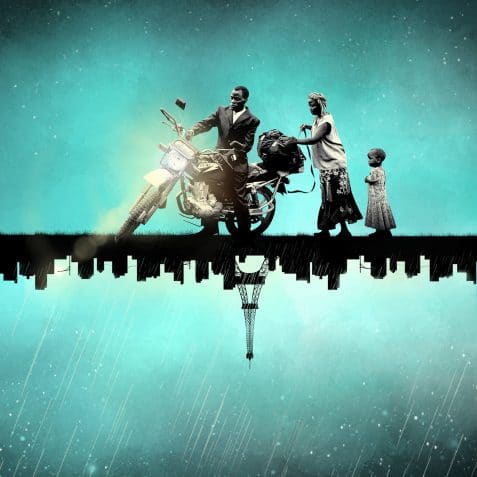 In the middle of this record-breaking summer, local residents Yvonne and Dan will host a screening of Thank You For The Rain – a film about a Kenyan farmer and his mission to get his community together on climate change. We asked Yvonne and Dan a few questions about what inspired them to to bring the film to Poplar Union, and why it is relevant to us all today.

Dan: So let’s see: how did we end up getting inspired by this film?

Yvonne: About six months ago, I was invited to a film screening and fundraiser for ‘Thank You For the Rain’. The photograph immediately captured my attention: in the top half of the photo you see a family, while the ‘mirror reflection’ in the bottom half is a stylized version of the Paris skyline: referring to the 2015 United Nations Climate Change Conference. This summit is where the film takes us eventually, but before getting there we get to see an intimate portrait of the pictured family: Kenyan farmer Kisilu, his wife Christine, and their children. Rather than just another documentary about climate change, this film is a personal story about a farmer, his family and his village.

Dan: I love the way it starts with Kisilu and Christine making their own film about their life, waiting for the rains to come (just like we’re doing now in London!). You don’t expect all the things that are about to happen.

What Makes this Film Relevant Now

Yvonne: I remember us complaining about the rain in London on the day we first went to see the film, and how silly we felt about that afterwards.

Dan: You know the fire on the moorlands near Manchester? They just managed to put that out. After three weeks…. “The fire service say ‘much-needed’ showers in the last few days helped finally bring an end to the incident.” – This film is pretty relevant!

Anyway, we went to see the film in January at Rio Cinema in Hackney, and were really blown away by some of the scenes. The story, the visuals, the music: it all comes together. And this film isn’t on general release, you can’t see it in normal cinemas! Just in special screenings…

Yvonne: Which is why we thought we could perhaps organise a screening ourselves. This film is powerful, heartbreaking, but also full of hope.

Why We’re Bringing it Poplar Union

Dan: I think it’s partly because it’s all about the fate of this one family, which happens to be really closely tied to big-picture issues like weather, climate, and how you can make a difference in the world.

Yvonne: We wanted our friends to see it, in fact, as many people as possible!

Dan: Yes! So, we set up a crowdfunding to purchase the screening license, with the money going towards Kisilu’s community work.

Yvonne: The crowdfunding was successful, we hosted a great first screening with our friends and colleagues, and now we wanted to bring the film to a wider audience. Poplar Union gave us the opportunity for the film to be included in their programme, so that everyone can come and see this gripping story.

• Come watch Thank You For The Rain Film Screening & Discussion here at Poplar Union on Thursday 2 August at 7.30 pm. It’s free to attend, and any donations made will go towards supporting Kisilu’s community work in creating climate resilient farming communities in East Africa.