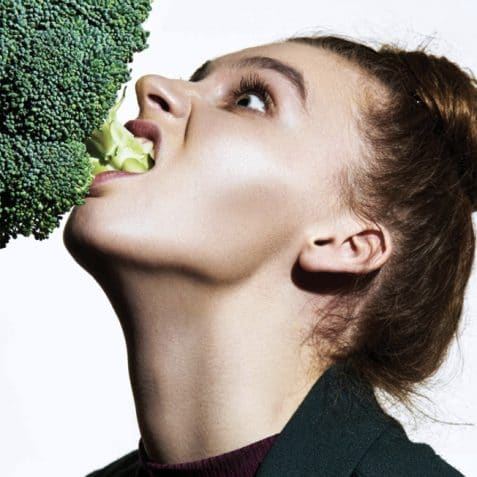 We’re all in a relationship with food…and it’s complicated.

Worst Absurd blends dance, physical comedy, and a whole lot of kale, in a satirical exploration of our obsession with the F word. Witness this century’s great love affair and gorge on a theatrical feast of everything “delicious”.

A collection of clowns and one very dazed producer, WORST ABSURD take on the world through a blend of dance, comedy and object theatre. We make loud, bold and accessible work that engages its audience in contemporary social discussions through a collage of witty gestural choreography, clown and eclectic soundtracks. We place importance on entertaining and uplifting our audience as well as provoking how they think about current issues and conversations.

Claudia Marciano is a performer and theatre-maker who enjoys multi-disciplinary work and unleashing her inner Bob Fosse. She studied Drama and Theatre Studies at University of Kent, and then went on to train on the two-year acting course at Fourth Monkey. During this time Claudia worked with Daniel Goldman, Karen Tomlin, and Sarah Case. She is currently touring Birth with Theatre Re, which will also be running at the Edinburgh Fringe Festival 2019.

Ceri Lothian started her career as Resident Assistant Producer at Theatre503, working on new writing productions that included the World Premieres of And Then Come The Nightjars by Bea Roberts (2016 National Tour), and  Rotterdam by Jon Brittain (Olivier Award Winner 2017). Ceri currently works with Deus Ex Machina Production as Associate Producer & General Manager, working on new writing and musicals in London and across the UK including  Working (Southwark Playhouse),  Spring Awakening  (Hope Mill Theatre, Manchester) and  DUST (Trafalgar Studios). She has also produced new comedy writing and scratch nights around London and at the Edinburgh Fringe Festival. She is an advocate for Working Class Artists, and an Ambassador for Inspiring The Future of Theatre with SOLT and UK Theatre.