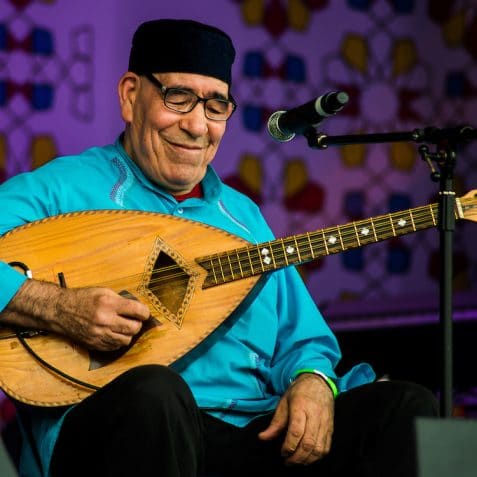 You’re in for a treat this month! We have the brilliant Seddik Zebiri Trio with us for Live in the Library.

Seddik Zebiri defines himself as a “music activist.” He’s a seasoned and experienced musician, having started playing music in the ‘60s; he is a pioneer and a trailblazer for young musicians.

His sound is closely related to his Algerian roots, fused with modern influences. Since beginning his musical journey in the Parisian scene of the ‘60s, the cultural scenario has deeply changed. But, as he likes to affirm, he is “always the same: for me music is always the same thing, there is no difference between the one which I played during the ‘70s, the ‘80s or the one I’m playing today”.

Seddik continues, “When you listen to my music you can initially define it as traditional, Algerian or Berber, but is has also some classic Middle Eastern elements. Then, when you listen further you can also identify other ingredients coming from rock, reggae, Latin or funk.”

The trio will offer a distinctive take on jazz, drawing on Arabic and Afro-blues influences. The Trio will create an absorbing, compulsively danceable sound, highlighting Algerian roots. A fusion of traditional North African combined with jazz, blues, funk, reggae and beyond.