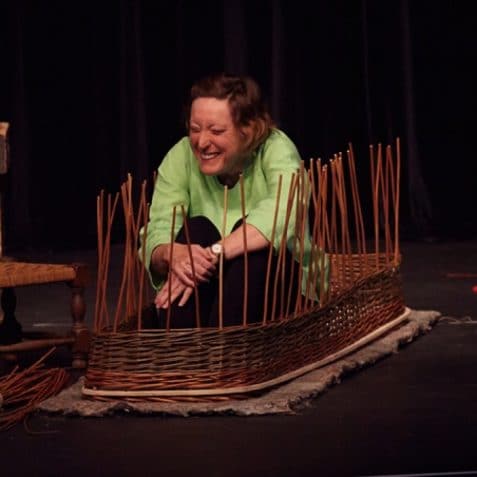 Liz Rothschild and Full Circle Productions present Outside the Box, a funny, wise and taboo-busting show which confronts death with grace and humour, asking its audience to embrace mortality and look on the bright side of life.

Outside the Box is part-theatre, part-spoken word; an intimate theatrical conversation which is “beautifully performed.” Liz’s unique experiences are swept together in a show which has been brewing inside her for years. The result is a taboo-busting aﬀair that expertly handles the ‘elephant in the room’ with humour and grace.

The show evolves organically to include new stories shared by its audience, widening the experience.

Liz is a performer, celebrant and award winning burial ground owner and death cafe facilitator. Her unique insight into the ‘business of dying’ has created a highly original and beautifully cathartic show, combining mercurial tales and miraculous truths, collected over the years from life’s ‘finishing line’.

Outside the Box is Liz’s ﬁrst solo show since Breaking The Silence, a show about the life of environmentalist Rachel Carson, which was performed over 100 times to audiences around the country. Breaking the Silence was described as a “masterpiece of its genre” and shortlisted for the Amnesty Prize at Edinburgh Festival in 2008.

Click here to ﬁnd out more about Liz, the show and her other adventures.

Praise for Outside the Box

“I’d like to see it performed in every Fringe Festival and every village hall in the UK!” Zelah Senior, Brighton Fringe 2016

“Incredibly uplifting and often very funny… delivered to the audience with compassion and understanding.” Swindon Advertiser